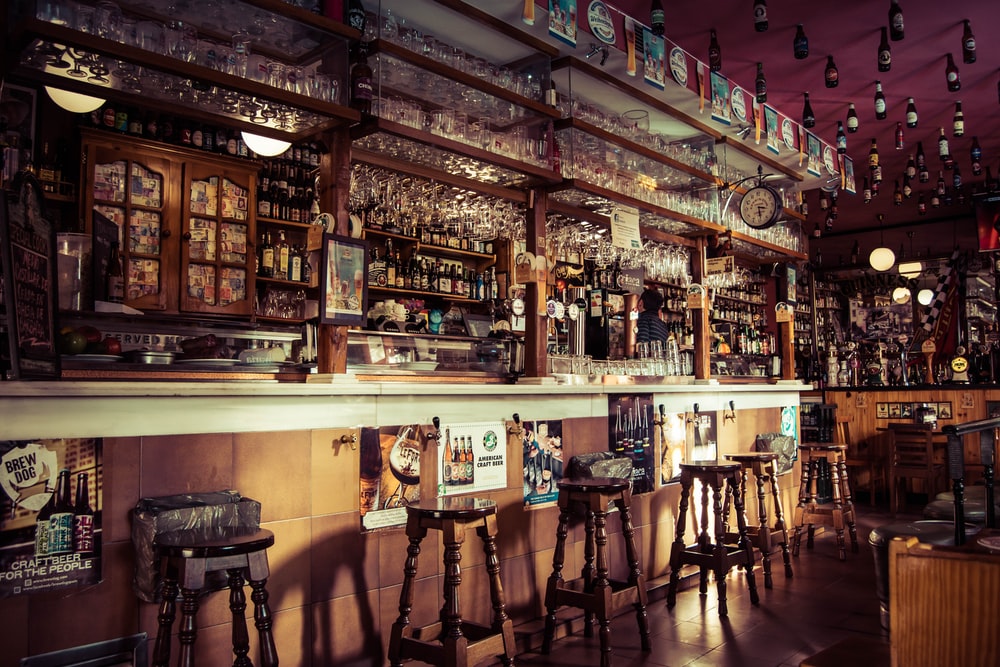 “Hi, Larry. What’ll it be?” Jon wiped the counter and placed a napkin in front of him.

“Anything – as long as it has rum in it. I’ve got a day full of meetings I need to wipe from my memory banks.”

“Where’s Tony?” Chuck craned his neck and looked around the room. “He could give you a run down of the options. The guy’s a virtual encyclopedia of cocktails.”

Jon added a plastic stirrer to the drink and placed it on the counter. “I don’t know. He came in about an hour ago. He keeps alternating between reading the newspaper and typing on his laptop. He’s on his fourth gin and tonic, though.”

“Maybe we should go over and greet him – give him the good ol’ Friday’s welcome.”

“Nah. We shouldn’t interrupt while he’s typing. We’ll catch him when he takes a break. He can’t hold in four drinks forever.”

“So, Jon, you really closing this thing down tonight?”

“Look around. Everybody is spending all their time at the newer places.”

“Bah! I don’t like those new places – people go there to dance. I just want a place to drink.”

“Besides, it’s so loud in those places. You can hardly think, much less talk. And the beer here is better than anywhere else.”

“Don’t worry. We’ll still be selling at the weekend festivals. You can get your fix then.” Jon placed a full glass next to the almost empty one.

“Has anybody seen Wiz?” Cindy asked.

“He was here a little while ago. He said something about… going to find a donkey?”

“Check it out.” Katherine tilted her drink towards the door and nudged Maria on the shoulder.

“I suddenly feel like I’m in a Men in Black movie.”

The two men, both wearing black suits, looked around the room before approaching the bar.

“Good evening,” the first man said as he reached into his jacket pocket and retrieved a badge. “I’m detective Hansen. This is detective Smith.”

“How can I help you?” Jon draped the towel over his shoulder and leaned on the bar.

“We are looking for someone.”

“Apparently they’re all down at the new clubs.” Tim pointed at the wall as if directing them somewhere. “Give me another, Jon.”

The detective looked at Tim for a moment and then directed his words back at the larger group. “We’re looking for a man. A suspect in a series of crimes…”

“Oh, we’ve had lot’s of villains through here,” Eric interrupted. “Super villains, confused villains, inept villains and we’ve had superheroes too. So I guess it balances out.”

“She should be here soon.”

The detective raised an eyebrow.

“Don’t worry, detective.” Jon spoke up, waving his hand along the bar. “They’re all writers.”

The two detectives exchanged an incredulous glance. “Well, this guy we’re looking for is dangerous – mean.”

Everyone looked at Sonia, who up to this point had been quiet.

“You think you know this man?” The detective said.

The group exchanged greetings as Danni found a seat at the bar.

The detectives looked at each other again. Both of them scowled. “Well, have you seen anyone odd around here?”

“What?” the detective raised his hands.

“Sir, we’ve seen all kinds around here. We’ve had orcs, aliens, vampires, zombies, scientists chasing kittens, trolls – I miss those trolls. We’ve even had Death himself show up a time or two.”

The officers turned to look at Jon as if waiting for an interpretation.

The detective sighed and looked at his partner. The partner was shaking his head and putting away his notepad. “Well, here’s my card. If you see anything… well… suspicious… I mean… related to my suspect, please give me a call.”

“Let us buy you a drink, detectives.” Steve raised his glass as he spoke. “Tonight’s the last night this place will be open. We’re all closing her down together.”

“Well, it is way past time for us to be off duty.” The detective looked at his partner who was shaking his head and looking at his watch. “Ah, I guess not. Smith here has some family event to get to.”

The place assumed an odd quiet as they watched the detectives leave.

“That was strange,” Marc said, finally breaking the silence. “Did the mustache on the quiet man look fake to you?”

“I thought the same thing.” Helen looked up from a table nearby where she had been scribbling notes.

At that time the man in the corner- who had been reading the paper during the entire time the detectives were around- stood and walked toward the group. “I want to thank you all for not mentioning me to the detectives. Certainly, you must have been curious about me as they were asking questions.”

“Yeah, a little,” Jon said. The group nodded in agreement.

“Well, I am the one they were looking for, but I assure you I’m not mean or dangerous. I’m just working on a story and they have been sent to stop me. They’ve been following me around for a week now. I can’t seem to get the ending right. They’re not real detectives.”

“I knew something didn’t seem right about those guys.”

“Don’t worry,” Jon said, pouring another gin and tonic. “You’re story is safe with us.”

“Yeah, mark the story complete and join us for a few. We’ve only got a couple more hours before closing time.”

NOTE: This story is written lamenting the closure of FridayFlash.org as the party moves to https://www.facebook.com/groups/fridayflash/. Feeling nostalgic, I’ll end it with this bit of poetry from Supersonic’s song “Closing Time“:

So gather up your jackets, and move it to the exits.

I hope you have found a friend.

Every new beginning comes from some other beginning’s end.