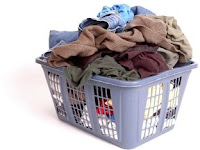 Marriage is so romantic – candle light dinners, afternoons snuggling on the porch and don’t forget laundry.

Many men don’t know how to handle the laundry issue. Some get by for a while without having to address it, but laundry will eventually become a problem. I have admitted before that I am no expert, but in this post I hope to cover some of my observations about laundry. It’s a bit of a ramble but I patterned it after my pile of laundry. We’ll start with the socks.

1. Where does dirty laundry belong? – For some strange reason most women believe that laundry does not belong on the floor. For many men this is the most logical place for dirty laundry. It keeps it simple. If it’s not on the floor, it can be worn again. How hard is that to keep up with? Instead, wives devise a strange system of plastic baskets where dirty laundry is supposed to go. The problem with this method is that we men see a basket as something you throw things at. (Hence the game with a similar name.) I try to make my wife happy and play along, but she apparently thinks I should have a 100% field goal percentage. Not even Michael Jordan shot that well so why should I be expected to? I figure 30-40% is pretty good at my age.

2. Who’s job is this anyway? – At the risk of sounding chauvinistic I want to make the case that laundry should be the wife’s responsibility.

For starters, have you ever looked at the controls on an average washing machine? There is a control for water level and a separate control for temperature. There is also another control that has strange wordings on it such as permanent press and pre-wash with the word rinse mixed in at least four or fives different places. How are we supposed to understand that? Have you ever looked at the controls for a lawnmower? In many cases you simply grasp the handle and pull a string. That was invented for a man! The washing machine was apparently invented for aliens, but somehow women discovered the secret and began to use them. (Is that because they’re from Venus or something?)

If that is not a good enough argument, what about the whole color matching requirement? Laundry has a complex matrix of sorting items by color. And it’s not just colors! I guarantee you that most men, if they are honest, have no idea what the difference is between lights and whites. And why are the “darks” sometimes sorted into separate piles for red and blue? It’s a known fact that men are far more likely to be color blind than women. Why should we risk it?

3. Stepping up to the plate. – Men, even though I make the claim we should be exempt from laundry, there will come a time when you may need to help with the laundry.

You can prolong the agony by washing one of your wife’s white shirts with a new pair of jeans, but I don’t recommend it. Playing dumb can buy us a few years, but eventually we need to step up to the plate and help out. For me it happened around year 10. Your mileage may vary. Don’t forget, though, nothing says “I love you” like a washed basket of laundry. If you don’t believe me, try it.

I don’t recommend jumping into the laundry game on your own. It is my suspicion that each wife changes the color matrix slightly to increase our chances of getting it wrong. Talk with your wife about how laundry should be sorted and washed. Ideally, you should have her put it in writing. This serves two purposes. It stops her from secretly changing the rules on you (yes, they do that) while at the same time serving as a cheat sheet for you. My wife created a chart and placed it on the wall over the washing machine. It shows the formula for each color sort and water temperature combination. (I still can’t tell the difference in whites and lights, but if you get them dried fast enough you can dump them all together and cover your tracks.)

4. Origami anyone? – While I recommend that men help out with the laundry, I am usually referring to the use of the washer and dryer. Folding laundry is an entirely different subject and worthy of its own post. Bottom line is this: Don’t fall for the thought that folding laundry is like making paper airplanes. It’s not. It more like making pterodactyls out of tissue paper.

So what do you think? How should laundry responsibilities be shared? Feel free to vent in the comments.

Feeling Inferior to the Family Pet

The Danger in Next Year